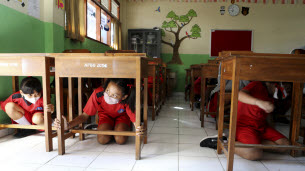 A 5.9 magnitude earthquake struck the Indonesian island of Sumatra early on Saturday, according to the United States Institute of Geological Surveys (USGS), killing at least one person and injuring dozens.

The earthquake was recorded at a relatively shallow depth of 13 km shortly before 2:30 a.m. local time (9:30 p.m. yesterday Paris time), about 40 km from the town of Sibolga in the North Sumatra province, according to the USGS.

A man in his 50s died of a heart attack caused by the earthquake and at least 25 people were injured, said an official from the regional disaster management agency, Febrina Tampubolon.

About 50 tremors were recorded by the Indonesian Meteorology and Geophysics Agency (BKMG).

The head of BKMG, Dwikorita Karnawati, recommended vigilance to the inhabitants concerning possible new tremors and called on the population to find shelter in a safe place.

“For those whose houses have been damaged, it is recommended not to stay indoors because possible aftershocks could damage them further,” she said during a virtual press conference.

Indonesia is located on the Pacific “Ring of Fire”, which means that it is subject to frequent earthquakes.

In 2018, a 7.5 magnitude earthquake followed by a tsunami in Palu, on the island of Sulawesi, killed more than 2,200 people.

In 2004, a powerful earthquake of magnitude 9.1 in the province of Aceh caused a tsunami and killed more than 170,000 people in Indonesia.