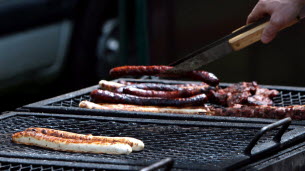 There is controversy, and there are facts. By declaring at the end of August that a “rib steak cooked on a barbecue” was “a symbol of virility”, the Green MP Sandrine Rousseau caused an uproar on social media. Many politicians, especially on the right, were indignant at his remarks. However, a new Ifop study for Darwin Nutrition confirms that a “hyper-meat diet often goes hand in hand with an ultra-conservative vision of the place of women in society”.

To arrive at this conclusion, the polling institute questioned 2,000 men aged 18 and over. More than half of them believe that “eating red meat gives strength and energy”. “The idea that red meat provides the energy needed to ‘conquer women and nature’ is therefore far from being marginal”, observes Ifop, which recalls that men consume twice as much red meat as women (61.2 grams per day against 34.1 grams according to ANSES).

A majority of “meats”

Among the men surveyed, 56% consider themselves to be “meat lovers”, a term which could nevertheless seem pejorative in today’s society. Interesting fact: those who call themselves “very meaty” are rather on the (all) right of the political spectrum.

Moreover, the Ifop study shows that the consumption of beef influences the degree of sexism. Culture of rape, misogynistic vision of gender relations, “traditionalist” conception of the family… The institute tested a dozen sexist stereotypes with the panel. The responses he collected show that heavy consumers of red meat tend to adhere more to these stereotypes than those who eat less, or almost none.

The more game we eat, the more sexist we are

It’s not just rib steak fans who are imbued with gender stereotypes: it’s also the case for big game consumers and hunters – no offense to the Ffederation of hunters, who sued Sandrine Rousseau after his remarks on the “intrinsic violence” of hunters. Among these three categories, they are respectively 15%, 20% and 20% to adhere to all the gender stereotypes submitted to them by Ifop.

For François Kraus, director of the political/news pole in the opinion department of Ifop, “to assert that an immoderate love for the “barbaque” would be intrinsically linked to unbridled sexism would be too easy a shortcut”. On the other hand, “in certain popular, rural or identity circles, displaying one’s taste for this symbol of strength and power is indeed the expression of a form of hegemonic masculinity”, concludes the expert.

Nothing surprising for Sandrine Rousseau, who recalled this Thursday on Twitter that “po change the world, we have to think about the representations that are conveyed in it”. The EELV deputy can count on the support of a large part of the male sex for this: according to the Ifop study, 62% of men approve of her idea of ​​devirilizing the consumption of meat cooked on the barbecue.

If it is the sympathizers of his party (75%) and the most feminist men (70%) who are the most favorable to it, they are far from being the only ones. Will the “manly totem” represented by the barbecue soon be ancient history?