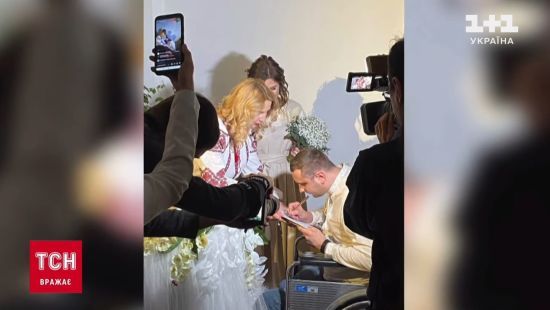 Not only relatives and friends, but also Serhiy’s siblings were present at the wedding ceremony of the lovers.

A 24-year-old grenade launcher from the Rivne region, who lost his legs in the war, and a paramedic from Volyn got married in Lutsk, the TSN.

TSN told the love story of Serhiy and Svitlana a month ago. The video of their matchmaking in just one day gained almost three million views on social networks, but it was banned by the Russians, who began to complain about the publication.

In the summer in the Mykolayiv region, a fighter was seriously wounded, his life was saved, but the boy was left without legs. This did not hinder happiness. He confessed to his beloved and she said yes.

Not only relatives and friends, but also Serhiy’s siblings were present at the wedding ceremony of the lovers. The lovers planned to get married and have a wedding after the victory. Then, they say, they will be able to dance the first wedding dance, because it is certain that Serhiy will already be walking on prostheses.

We will remind, the day before it became known that Valery Zaluzhny received a million dollars as an inheritance and donated it to the army. This was learned by the American publication “New York Times” and already confirmed by TSN in the press service of the Armed Forces of Ukraine. The money was bequeathed to the Ukrainian general by Hryhoriy Stepanets, an American of Ukrainian origin, who left for the USA in the 90s, where he later worked as a software developer.

The man was killed, and she had a bullet under her lung: the occupiers shot a car of volunteers who were delivering bread in Sumy region

Silence is a cause for concern: residents of the Kherson region are waiting for the treachery of the enemy in moments when there is no shelling