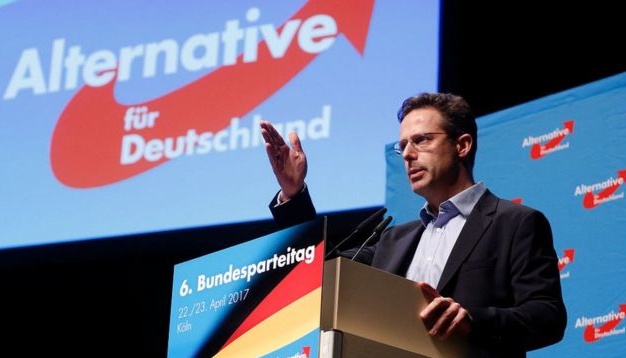 Politicians of the German right-wing populist party AfD (“Alternative for Germany”) could be used in the interests of Russia, and the far-right activist Manuel Oxenreiter was an important intermediary.

As reported by Ukrinform, this is stated in the investigation of the well-known researcher of far-right movements Anton Shekhovtsov, published in a German publication Tagesschau.

“Research for tagesschau.de shows how AfD politicians could be involved in the interests of Russia. And the ultranationalist Oxenreiter had an important mediating position here,” the article says.

The investigator believes that Oxenreiter, who has been an activist in far-right circles in Germany since the 1990s, became interested in Neo-Eurasianism, a peculiar form of fascist ideology, after meeting with Russian far-right ideologue Alexander Dugin in late 2012. In late 2013, Dugin recommended Oxenreiter to the ultra-nationalist businessman Konstantin Malofeev as one of the German figures who could be involved in Russian influence operations in Europe. Oxenareiter was made a “star of international Russian propaganda” by the Russian state television company RT, which hired him in 2013 as a “political analyst”, “German journalist” and “Syria expert”.

Read also: Putin has a “philosopher”. Dugin. At least Nietzsche was a philosopher for Hitler…

Oxenreiter gained access to a wider circle of contacts in Russia through Polish political activist Mateusz Piskorski, who, according to a source from one of the EU’s intelligence agencies, had a connection with Sargis Mirzakhanyan, an official of the central office of the Russian parliament.

Piskorskyi and Oxenreiter, in particular, were involved by the Kremlin as fake “election observers”. They “observed” together the “referendum” in Crimea in 2014 and the “parliamentary elections” in the so-called “DNR”.

In 2016, Oxenreiter, together with Markus Frohnmayer of the AfD youth wing and Thuringia MP Thomas Rudy, registered the “German Center for Eurasian Studies” in Berlin. With the help of this organization, in particular, the trips of Thomas Rudy and Udo Stein, members of the German parliament from the AfD, as “international observers” to the “DNR” were organized.

Piskorskyi, Mirzakhanyan and Oxenreiter stepped up their work in Germany both to influence the mood in Germany and to create pictures and statements that were supposed to serve Kremlin propaganda in Germany. “Documents in the author’s possession indicate that protest actions were also organized and assistance was provided in arguing for the AfD,” the investigation says.

In March 2016, Piskorsky recommended Frohnmeier to Mirzakhanyan as “our candidate” worthy of support in the 2017 federal elections, “who may be valuable for Russian foreign policy,” the investigation states.

Another 2019 investigation by the BBC, ZDF, Spiegel and La Repubblica found that the document “Frohnmeier’s Election Campaign/Action Plan (Draft)” prepared by Oxenreiter, created on April 11, 2017, stated that during the election campaign the candidate would focus on issues of “good relations with the Russian Federation”, “conservatism” and “criticism of the USA”. And also a request for “material” and “media” support for Frohnmayer. Frohnmayer himself denied in a comment to “tagesschau.de” that he knew about it. At the same time, the publication draws attention to the fact that after Frohnmayer was elected to the Bundestag, Oxenreiter became his employee in September 2018.

The publication believes that Oxenreiter and his contacts “apparently played an important role in establishing contacts between the AfD leadership and high-ranking politicians in Moscow.” According to the available documents, Oxenreiter, in particular, contributed to the initiation of the visit of AfD politicians to the Russian capital, which took place in 2017.

In January 2019, Frohnmayer terminated the employment contract with Oxenreiter, when an investigation began against the latter in the case of the arson of the Hungarian cultural center in February 2018 in Uzhhorod. Oxenreiter was wanted until August 2021. there were no reports of his death in Moscow. According to “tagesschau.de”, the Federal Prosecutor’s Office of Germany closed the case against Oxenreiter in December 2021.

As reported, Russia actively uses various populist parties and organizations, both right-wing and left-wing, to spread its influence in EU countries.