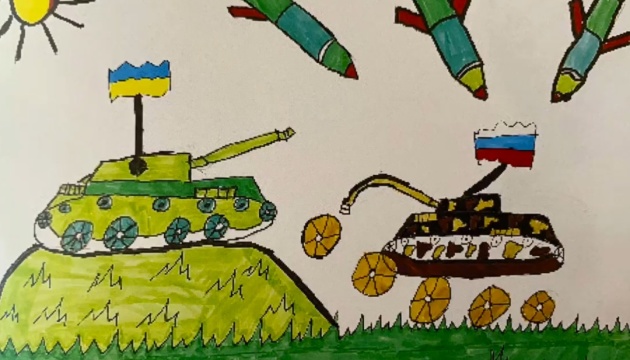 Drawings of children of war, separated by 80 years, but so similar in content, are presented at the exhibition of the Polish-Ukrainian archival project “Mother, I do not want war!”, which is held at the Pilecki Institute in Berlin.

This was reported by the correspondent of Ukrinform.

The exhibition presents the drawings of Polish children, which are evidence of their experiences during the Second World War and the German occupation of 1939-1945, as well as modern drawings of Ukrainian children who found themselves in a situation when Russia is waging war against Ukraine.

The idea of ​​the project is to show that war always looks the same in the eyes of a child, the similarity between historical and modern pictures is striking.

Read also: An exhibition of children’s drawings “Mother, I don’t want war” was opened in the Czech Republic

The author of the concept of the project, Dr. Dorota Sadowska of the University of Warsaw, whose family suffered during the Second World War, noted in a conversation with a correspondent that earlier people in the world, to whom she showed war drawings of little Poles, made in 1946 (in total, there are more than 7 such in the archive thousands), did not want to believe that such a thing could happen. However, after the start of the war in Ukraine, the attitude changed.

“I have a feeling that the same thing is happening: the soldiers of the aggressor are killing innocent civilians – women, children,” Sadovska says. “This is madness, in today’s world, 80 years after the end of the Second World War,” the scientist notes.

According to her, the task of the project is to prevent the recurrence of horrors and draw attention to the need for assistance to Ukraine.

Read also: Russia has deported more than 7,700 Ukrainian children since the beginning of the war – Office of the Ombudsman

Ukrainian psychologist Antonina Bogacheva noted that children are the most vulnerable part of the population that suffers from hostilities. “Through these pictures, you can see what hurts every mother, every Ukrainian woman. It is very important to see the world through the eyes of a child,” she emphasized.

Maksym Yemelyanov, adviser-envoy of the Embassy of Ukraine in Germany, who took part in the opening of the exhibition, thanked the organizers for the idea of ​​the project, stressing that the humanitarian and political aid of Poland brings the victory of Ukraine closer. He noted that Germany and Poland together accepted millions of Ukrainian refugees and are the countries that accepted the most Ukrainian citizens.

Read also: An exhibition of Ukrainian children’s drawings will be held in Tokyo

This archival project first saw the light of day in Warsaw and simultaneously in 16 Polish cities on July 19, 2022. Currently, he is traveling the world: the exhibition has already taken place or is planned in Austria, Azerbaijan, Bulgaria, Bosnia and Herzegovina, India, Italy, Canada, Cyprus, Korea, Kuwait, Malaysia, Portugal, Slovakia, Czech Republic. In Germany, in addition to Berlin, the exhibition also opened in Dusseldorf.