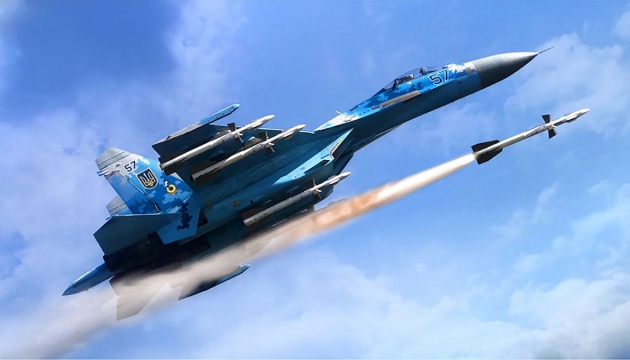 During the past day, the aviation of the Defense Forces made 14 strikes on the areas where the Russian troops were concentrated and two strikes on the positions of the enemy’s anti-aircraft missile systems.

This information was made public by Facebook The General Staff of the Armed Forces of Ukraine, reports Ukrinform.

“During the past day, the enemy launched 37 air strikes and 10 missile strikes, in particular, on the civilian infrastructure of the cities of Dnipro and Zaporizhzhia. It carried out 97 attacks from rocket salvo systems, residential buildings in Kherson were also hit. According to preliminary information, at night the enemy used 24 Iranian attack drones “Shakhed-136″. All of them were destroyed by the Defense Forces of Ukraine,” the message reads.

There is a great danger of further Russian air and missile attacks on the entire territory of Ukraine, the General Staff added.

Suffering numerous losses, the enemy does not stop offensive actions in the Bakhmut and Novopavliv directions. He conducted unsuccessful offensives in the Lymansky and Avdiivskyi directions. On Kupyansk, Zaporizhzhya and Kherson – it is being defended.

The defense forces repelled the attacks of the occupiers in the areas of the settlements of Chervopopivka in the Luhansk region and Verkhnyokamianske, Spirne, Rozdolivka, Blagodatne, Bakhmut, Klishchiivka, Maryinka, Vugledar and Pavlivka in the Donetsk region.

Read also: In the fight for Bakhmut the border guards destroyed the assault unit of the Russians

On Volynsky, Polisky, Siversky and Slobozhansk directions the situation has not changed significantly, no offensive groups of the enemy have been detected.

On Seversky direction the enemy shelled the areas of Leonivka, Yasnaya Polyana, and Mykhalchyna Sloboda in the Chernihiv Region and Budivelny, Volfyny, and Timofiivka in the Sumy Region.

On Kupyansk direction Sinkivka, Ivanivka, Kotlyarivka and Tabaivka in the Kharkiv region and Stelmakhivka in the Luhansk region were affected by fire.

On Lyman direction the enemy shelled the positions of our troops in the areas of Makiyivka, Ploshanka, Chervonopivka and Nevske settlements in the Luhansk region and Veryginsky Forestry and Yampolivka in Donetsk region.

On Novopavlovsk direction the enemy shelled Bogoyavlenka, Prechistivka and Zolota Niva in the Donetsk region.

On Zaporozhye direction the areas of 25 settlements were affected by tank and artillery fire, including Vremivka, Vilne Pole, Novopil in the Donetsk region, and Mala Tokmachka, Novodanilivka, and Orihiv in Zaporizhzhia.

On Kherson direction the occupiers continue to shell peaceful towns and villages. 20 settlements were affected, in particular, Beryslav, Antonivka, Dudchany, Kachkarivka, Bilozerka, Novokairy, Respublikanets and Kherson. There are victims among the civilian population.

According to the General Staff, in the temporarily occupied territory of the Autonomous Republic of Crimea, the enemy is conducting preparatory measures for the next wave of mobilization. Thus, by January 29, “state” and private institutions must submit lists of persons for reservation to military commissariats. The next mass mobilization wave is planned for the end of February. At the same time, from February 1, all repair and construction work at budget enterprises and institutions will be stopped, and all planned funds will be redirected to support armed aggression against Ukraine.

Read also: Ukraine can win and return Crimea – ex-commander of the US Army in Europe

“During the past day, the aviation of the Defense Forces made 14 strikes on enemy concentration areas and 2 strikes on the positions of its anti-aircraft missile systems. In addition, 2 enemy Su-25 aircraft, a Ka-52 helicopter, 4 Orlan-10 UAVs and one – of the “Supercam” type. Missile troops and artillery units of the Defense Forces of Ukraine hit 1 command post, 12 manpower concentration areas and 4 ammunition depots of the Russian occupiers in a day,” the General Staff of the Armed Forces concluded.

As reported, since February 24, 2022, the Defense Forces of Ukraine have eliminated about 123 thousand 80 Russian aggressors.