Russia is close to its second major defeat in the war after Ukraine’s counteroffensive near Kharkov. Ukrainian troops have almost surrounded the city of Lyman in Donetsk region and may soon engage a large group of Russian troops, the Institute for the Study of War said. If the Armed Forces of Ukraine occupy Lyman, which is a strategic railway junction, they will have a bridgehead for further offensive actions. Korespondent.net tells the details.

The armed forces are preparing to encircle the occupiers

The armed forces of Ukraine continue to conduct a staged counteroffensive against the occupation forces of Russia in the area of ​​the city of Lyman, which is located at the junction of the administrative borders of the Kharkiv, Luhansk and Donetsk regions.

This counteroffensive is a logical continuation of the Kupyan offensive and is already taking place on the eastern bank of the Oskol River, which was successfully forded, and the bridgeheads on the left bank were expanded.

The Russian occupiers may soon face “inevitable defeat” in the Lyman area, according to a report by the American Institute for the Study of War. published on the night of September 29.

The Russian “army” came forward with the assumption of a possible defeat of the Russian group, the summary emphasizes. They reported on the advance of the Armed Forces of Ukraine to the west, north and northeast of the Liman.

The Armed Forces of Ukraine are preparing to encircle Russian forces in the city and along the northern bank of the Siverskyi Donets River. In addition, the Armed Forces threaten the positions of Russian troops and the supply lines of the Liman group of Russia.

A Russian collapse in the Lyman-Yampil sector is almost imminent now.
The pocket is about to be closed off if this is not the case yet.
Russians need to leave before it’s too late, but now it would be hard as Ukraine can target their withdrawal route. pic.twitter.com/H7EZPDHZWe

According to ISW, Ukrainian units have advanced southeast of the village of Kolodezi and are fighting on the outskirts of Torsky, located approximately 12 kilometers northeast of Liman. The Armed Forces also broke through the Russian defense lines in the Yampol region (13 kilometers southeast of Liman) and are advancing towards Torsky from the southwest. 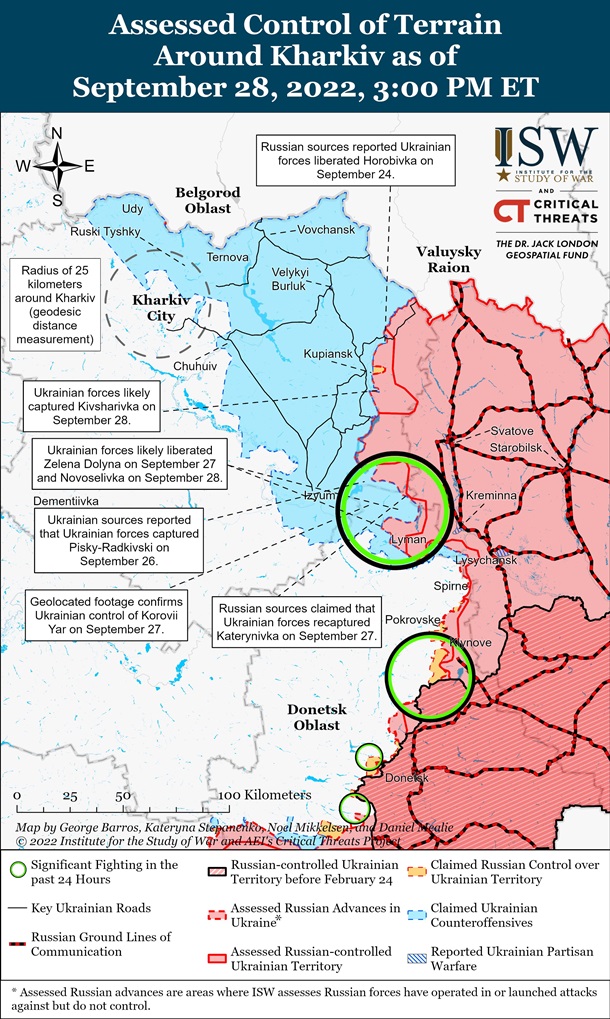 The offensive of the Armed Forces of Ukraine on Liman

On September 29, an OSINT analyst under the nickname NLwartracker wrote that the Russian invaders failed to establish serious fortifications near the Lyman, which could effectively resist the Ukrainian counteroffensive.

The Lyman-Zarichne road (leading from Liman to the east) is under full fire control of the artillery of the Armed Forces of Ukraine, the expert writes. Currently, only the road in the direction of Zarichny-Torskyi is functioning. Some forces of the Russian army took advantage of this and retreated from Liman, the report says.

Now there is only one place between Liman on Zarichny, where the Russians somehow strengthened themselves. The analyst indicates the coordinates of these points:

At the same time, he notes that the fortifications are located not far from the gas station and there are too few of them to effectively resist the strikes of the Armed Forces. In his opinion, they do not plan to fight here – the purpose of these points is to cover the main forces retreating from Liman.

Only defensive works seem to be on the entrance of Zarchine near the gas station. Most likely retreating forces are taking up pos. here to cover their retreat. Looking at the state of the positions 🇷🇺 forces where not counting on a retreat.@DefMon3 @ArtisanalAPT @COUPSURE @bradyafr pic.twitter.com/tpS8B0deAx

ISW experts concluded that the Russian authorities failed to “create informational conditions for a potentially quick defeat of the Russian Federation in Liman”.

“The Ministry of Defense of Russia did not talk about the latest Russian losses in the Lyman area and was not prepared for the fall of this sector of the front, which will probably worsen the already low morale,” American analysts state.

The situation was the same before Russia’s biggest defeat after the retreat from northern Ukraine near Kharkov in September. After the unexpected breakthrough of the front, the Russian army panicked and fled, allowing Ukrainian forces to liberate about eight thousand square kilometers in less than a week. As a result, almost the entire Kharkiv region was deoccupied.


Why are Western countries calling to leave Russia?

They predict that the capture of Lyman and the advance to Lysychansk and Severodonetsk will intensify the discord between the Russian nationalists and the military leadership of the Russian Federation, as well as the occupying forces and their command.

All this will take place against the background of mobilization, which caused a record drop in Putin’s rating since the beginning of the pension reform and caused a sharp negative reaction in society, American experts noted.

The Armed Forces do not go head-on. What experts say about Lyman

The Russian occupiers are trying with all their might to defend the Lyman-Yampil line, throwing all their reserves into battle, even fresh ones, writes Ukrainian military expert Serhiy Zgurets.

“By the way, the enemy here is actively using remote mining to delay the advance of our units. In turn, our troops do not go head-on to the Liman, but provide its encirclement, cut off all the enemy’s retreat routes and cut off the logistical support routes,” – it is said in his Espresso column.

The only remaining transport corridor for Russian forces passes through Zarichne – Torske, which is also under the fire control of the Armed Forces of Ukraine.

“The further movement of our units in the direction of Nevsky and Terna will mean the blocking of all supply routes for this group and the creation of prerequisites for the complete defeat of the enemy’s Limano-Yampol group,” the expert wrote.

There is already a statement that the Russian group in Lyman has fallen into the operational encirclement, but there is still no confirmation from the General Staff of Ukraine, he noted.

Military journalist Yuriy Butusov says that since there is currently no official position on the situation near Liman, he will speak with caution.

“Our troops are trying to break through the enemy’s Oskol front, gradually knock it out and, of course, surround Liman in order to force the enemy to surrender this very beneficial for us communication node. Our troops have the tactical initiative in this area and the offensive is already on the territory of Donetsk region.” , Butusov said on the air of Radio HB, referring to Russian maps.

Western experts and observers are actively commenting on the situation in Lyman. Thus, the Swedish-American economist and diplomat, a leading international expert on the national economies of Ukraine and the countries of the former USSR, Anders Oslund, compared Putin to Hitler.

“Putin seems surprisingly confused about his war in Ukraine. Like Hitler, he personally commands the troops (Stalin was smarter). He insists that they stay in Kherson and Liman, and most likely they will be cut off or captured “, the expert wrote.

Putin appears remarkably lost in his war in Ukraine. Like Hitler, he seems to command the troops personally (Stalin was smarter). He insists that they stay put in Kherson & Lyman & they are likely to be slaughtered or taken prisoners.

“The situation looks more and more dangerous for the Russian forces in Liman, as the Ukrainian forces are about to cut them off. Another painful defeat of the invasion forces is coming,” wrote a well-known Ukrainian lobbyist, former Prime Minister of Sweden Karl Bildt.

The situation looks increasingly precarious for the 🇷🇺 forces in Lyman as the 🇺🇦 forces are about to cut them off. Another painful defeat for the 🇷🇺 invasion forces is looming. pic.twitter.com/BXHcPp7Hth

“A nice detail from the morning report of the Ukrainian military: on September 26, the Russian occupiers sent a column of seven tanks with newly mobilized soldiers to Liman. They had no training to learn how to drive tanks or fire weapons. Two tanks got into a car accident,” wrote the doctor of political philosophy, Michael McKay, who calls himself a veteran of the revival of Ukrainian democracy.

On September 26, the Russian invaders sent to Lyman a column of seven tanks crewed by newly-mobilized men. They had no training to learn how to drive tanks or fire their weapons. Two of the tanks were in road accidents.