Ukrainian singer Ani Lorak, who has lived and worked in the Russian Federation since 2014, wrote an open letter to supporters and critics. In it, the traitor said that “nobody has the right to tell him how to love and support Ukraine”, so the singer forbids “DPR”, “LPR”, “Right Sector” and “Svoboda” from mention his name.

The corresponding text appeared on Anilorak’s website, writes the Observer.

Hiding from rockets and occupation in Russia, a Chernivtsi native said she was helping support her native people, but “not on camera”. 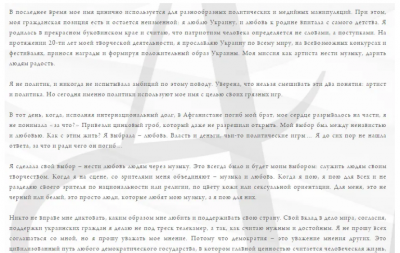 In the seventh month of full-scale war, the artist complained that his silence on the genocide was a mistake. But not because she didn’t make an effort to tell the truth to her supporters in the Russian Federation, but because her silence would have been used against her.

“Recently, my name has been cynically used for various political and media manipulations. At the same time, my civic position is and remains unchanged: I love Ukraine and have imbued love for the fatherland since childhood. I was born in the wonderful region of Bukovina and I believe that a person’s patriotism is not defined by words, but by actions,” wrote the artist, who entertained Russians for more than 8 years.

Lorak said the anti-war appeals Ukrainians expect from her are politics and cannot be combined with creativity. In general, according to the Ukrainian woman, she did not let her people down, but politicians use her name for “dirty games.”

The singer assured that during her performances she does not divide her fans by nationality, religion, skin color, sexual orientation (as well as, obviously, bloody opinions about the genocide of Ukrainians). Lorak enjoys performing for anyone who loves his music.

“No one has the right to tell me how to love and support my country. I contribute to the cause of peace, harmony and support for Ukrainian citizens, not under the fire of television cameras, but as I deem necessary and worthy. I am not asking everyone to agree with me, but I am asking you to respect my opinion,” the open letter read.

Finally, Ani Lorak said that the pseudo-republics “DPR” and “LPR”, as well as “Right Sector” and “Svoboda” would not have the right to mention the name of the Ukrainian woman, because they have no connection with her. Traditionally, the singer did not say a word about the Russian occupiers who terrorize her people.