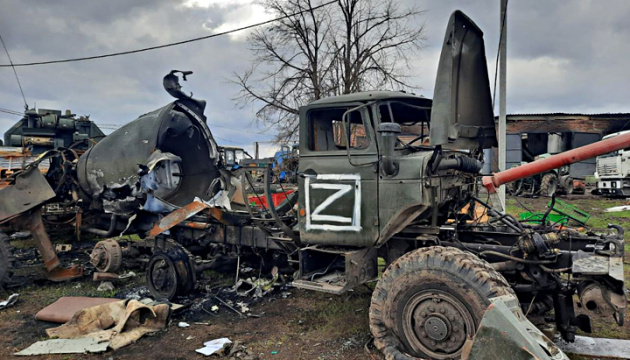 During the past day, September 22, the troops of the Russian Federation shelled eight regions of Ukraine.

As reported by Ukrinform, this is stated in the consolidated information of the regional military administrations on the situation in the regions of Ukraine as of September 23.

A rocket attack took place in Zaporizhzhia around midnight shelling. the Russians fired about 10 shells into the city, aimed at infrastructure facilities. Information about victims and destruction is being clarified.

In the past day, invaders shelled the Novgorod-Siversky district twice with artillery and mortars in the Chernihiv region. Without victims and destruction.

In the Sumy region of the past, there was an enemy carried out 11 shelling of border communities. About 130 hits were recorded. 10 communities came under fire: Shalyginska, Velikopysarivska, Bilopolska, Krasnopilska, Znob-Novgorodska, Esmanska, Khotinska, Yunakivska, Seredino-Budska, and Myropilska. Four civilians were injured, a total of 20 houses, two businesses, a school, a kindergarten, seven cars, and a village cultural center were damaged.

Read also: In Ukraine, 11 civilians were killed and 44 were wounded in a day due to Russian shelling

In the Dnipropetrovsk region, the Russians again shelled the Nikopol district. In the morning, Nikopol and Marhanets were hit with “Grada” and heavy artillery. According to preliminary information, two people died and nine were injured in Marganka. One house was destroyed, eight were damaged. The city is partially without light. In Nikopol, 10 houses were previously damaged. Employees of the State Emergency Service and the police are working at the site of the shelling.

In the Kharkiv region, the enemy shelled settlements adjacent to the contact line and the border with the Russian Federation. Yesterday, the Russians massively shelled Kupyansk and the district. There are victims, including children. According to the Center for Emergency Medical Assistance, three people were injured in Kupyansk, including two children – a seven-year-old boy and a girl. Doctors assess their condition as moderate. Four people were injured in the Kupyan district. One person died in the Kharkiv district. In the Chuguyiv district, two people were blown up by a mine, they were hospitalized.

In the Luhansk region, units of the Defense Forces repelled Russian attacks in the districts of Kupyansk, Spirny, Mayorsk, Zaytsevo, Avdiivka, Novomykhailivka, Opytny, and Kamianka. Aviation of the Defense Forces hit 25 areas of concentration of manpower and military equipment of the Russian army and six positions of anti-aircraft missile systems. On September 22, missile troops and artillery inflicted fire damage, in particular on control points, areas of concentration of personnel and military equipment, air defense positions, as well as ammunition warehouses of the aggressors.

In the Donetsk region, Russian troops shelled the village at night. Gostre of the Kurakhiv community. A residential building was destroyed, one person was injured. The enemy also shelled Maryinka, Krasnohorivka, Georgiivka, and Novomykhailivka. Information about the victims is being clarified.

Last night, the Russians shelled Slovyansk with S-300 missiles. No victims. They also launched a rocket attack on Toretsk. The 9th floor was damaged. There were no victims, most people were evacuated, one person was injured.

In one day, seven people died in Donetsk region, 17 were injured. The region remains without gas, partly without water and electricity.

Explosions rang out in Mykolaiv at night. Previously, the office building of the industrial infrastructure object was affected. Private houses, water supply and electricity networks were also damaged. The information is being clarified.

The Berezneguvat community remains under constant fire. During the past day, there were enemy attacks on the outskirts of the village. Novoukrainka, village anteater The village was also shelled in the evening. Vysunsk, infrastructure objects, private houses, three trade objects and a gas pipeline were damaged with subsequent ignition. There are no casualties.

Read also: On the site of some houses there are landslides: the consequences of the Russian shelling of the village on Kherson regionothers

In the Kherson region, the situation remains difficult. Fighting continues. According to information from the “South” operational command, marines destroyed an enemy Mi-24 helicopter in the Kostroma area. Two Orlan-10 drones were also destroyed. The armed forces of Ukraine stopped the invaders’ attempts to move across the Dnipro, using fire control to stop their attempts to cross the Kakhovskaya dam and cross the barge from Kherson.

Aviation carried out 21 strikes, and missile and artillery units carried out almost 280 fire missions. In particular, command posts in Kherson, command posts in Novovoskresenskyi and Dudchany, ammunition depots, areas of accumulation of enemy weapons, equipment and manpower were affected.

The Russian mass media reported that Deputy Head of the Administration of the President of the Russian Federation Serhiy Kiriyenko had arrived in Kherson to prepare a pseudo-referendum. In addition, the official is going to launch the “Revival Leaders” competition in the city, which was organized to “form the new elite of the region.”

Read also: Over the past day, the enemy launched four missile and 27 airstrikes on Ukraine