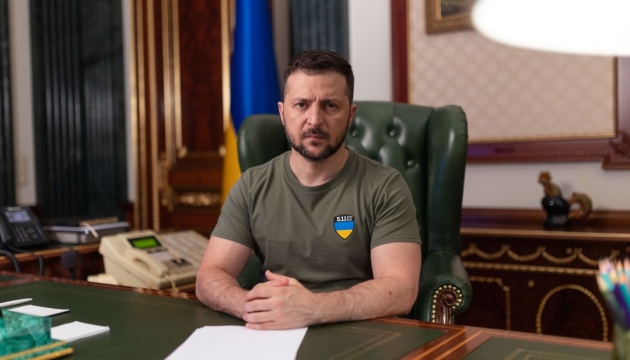 The President of Ukraine Volodymyr Zelenskyi said this in his address, Ukrinform reports.

Today, the events in New York are ending within the framework of our state’s participation in the next session of the UN General Assembly.

Ukraine showed that not only the truth is with us, but also the strength is with us, the initiative is with us, confidence – it is we who have confidence in victory. The world is always sensitive to such things. Who is really strong, and who pretends to be strong. Who really feels their strength, and who tries their best to hide weakness and insecurity.

Different countries equally wanted to hear specifics. Specifics on how to restore peace, how to end this war. Ukraine presented its vision. Clear, logical, fair and realistic.

Five points. The first: punishment of the aggressor. The second: protection of life, that is, all the necessary assistance to our state in defense. The third point: restoration of security and territorial integrity. The fourth point: security guarantees. And the fifth: the determination to achieve all this together with us is the determination of the world majority.

And what did Russia present? Again, lame excuses, complaints and constant false propaganda, which the world has tired of for a long time, but Russian representatives still repeat it. A clear contrast with us.

I am grateful to all the heads of state, all the politicians, public figures, cultural and business leaders who expressed their support for us at the General Assembly and at all the events in America this week.

In particular, I participated in a special meeting on food security. This is one of the key topics at the UN this year – it was Russian aggression that made it so relevant. The world is looking for means to protect people from hunger and price crisis, and Ukraine has something to offer. We constantly increase food exports, we help the UN Food Program, we send grain as humanitarian aid to countries that need it – Ethiopia, Somalia. And Ukraine has never, never provoked any crisis in the food market. The world appreciates all this.

Thanks to the decency of Ukraine and the constructive desire of our state to help others, we have a unique result: Russian propaganda is losing its influence even in the world where we still have to secure a strong informational position, in particular in the countries of the Global South. These are Latin America, Africa, South Asia.

Also this week I participated in several important investor communication formats. The summit under the auspices of “Forbes” is a gathering of the world’s largest businessmen engaged in philanthropy. Video conference with representatives of BlackRock and Goldman Sachs – important global players. Clinton Global Initiative. Each such measure adds attention to Ukraine, adds specific projects and benefits to our state, strengthens our stability, and brings our victory closer.

The First Lady of Ukraine met in New York with Liz Truss, the new Prime Minister of Great Britain, and it was a very substantive meeting. With the first lady of France, Brigitte Macron. Together with Prime Minister Denys Shmyhal, she met with Antonio Guterres, UN Secretary General. In total, she held almost 20 meetings.

At the invitation of Charles Michel, Olena took part in the Women in Conflicts forum, which took place on the platform of the General Assembly. She presented a special charity fund – the Olena Zelenska Foundation, in order to accumulate even more support for Ukrainians, specifically for the humanitarian direction – primarily education, medicine, and the restoration of what was destroyed by Russian strikes. We are creating all the necessary institutional framework so that everyone in the world can help us as efficiently, quickly and reliably as possible.

The Prime Minister of Ukraine held dozens of high-level meetings. Accents are clear. The situation at Zaporizhzhya NPP. Expansion of defense, financial and sanctions support. Support in preparing our country for winter, support in reconstruction. During each meeting, there was an emphasis on the fact that Russian terror must receive a clear global response – military, economic and legal, including the recognition of Russia as a state sponsor of terrorism.

Our proposals for security guarantees for Ukraine, for Europe and the world were presented in New York – a project developed by the Yermak-Rasmussen group. Denis Shmyhal also met with the heads of the International Monetary Fund, the World Bank, and other financial and investment majors of the world. Thank you all for your support!

The Minister of Foreign Affairs held more than 30 meetings, and the vast majority of them were with representatives of countries that are not our traditional partners. We are strengthening our position in relations with Africa, Asia, and Latin America.

Probably, this is the most meaningful and positive participation of Ukraine in the UN General Assembly for all the years of our independence. The world not only talks about Ukraine, but also realized that by helping Ukraine, it also helps solve urgent global problems and crises. We offer a way to make the world more stable and safer. The world heard it.

The world will react absolutely justly to pseudo-referendums – they will be unequivocally condemned, and to the criminal mobilization that the occupiers are currently trying to carry out in Crimea and other parts of Ukraine, which they still control. These are not just crimes against international law and the law of Ukraine. These are crimes against specific people, against the people.

I have a simple request to all our people who are in the temporarily occupied territory: do the main thing – save your lives and help us weaken and destroy the occupiers.

In any way, hide from the Russian mobilization. Avoid subpoenas. Try to leave the free territory of Ukraine.

But if you do end up in the Russian army, then sabotage any enemy activity, interfere with any Russian operations, give us all important information about the occupiers – their bases, headquarters, ammunition depots. And at the first opportunity, switch to our positions. Do everything to save life and help liberate Ukraine.

Since the beginning of active actions in the east of our country in September, about 9 thousand square kilometers of territory, about 400 settlements have already been liberated. This tangible result was achieved thanks to the fact that our people in the temporarily occupied territory help us. Please do everything so that such help becomes more.

Give our special services all the information about those who organize and help to conduct this farce with pseudo-referendums. Transmit all information about the Russian mobilization, about the Russian army in general. Help those in the occupied areas who need it: elderly people, single people, families with children. Ukraine will return to all its land, and we must keep as many of our people there as possible.

On my behalf, the head of the Office, Andriy Yermak, held a meeting today regarding assistance to Ukrainians whom we have freed from captivity. The head of the State Government, the head of the National Guard, the ministers of internal affairs, defense, health care, social policy, representatives of the Ministry of Foreign Affairs, and our ombudsman were present. Our soldiers must receive all the necessary, real help, any assistance. The state knows how to be grateful to its heroes. I am waiting for a report at the beginning of the week with a specific plan to support each person.

Today, the Russian army used Iranian drones for strikes in the Dnipropetrovsk region and Odesa. I instructed the Ministry of Foreign Affairs to react strongly to this fact. The world will know about every fact of collaboration with evil, and it will have corresponding consequences.

It has already been decided to deprive the Ambassador of Iran to Ukraine of accreditation, as well as to significantly reduce the number of diplomatic personnel of the Iranian Embassy.

Thanks for the accuracy of our soldiers!

Thank you to everyone who fights and works for the victory of Ukraine!

Grateful to everyone in the world who helps us protect life and freedom!