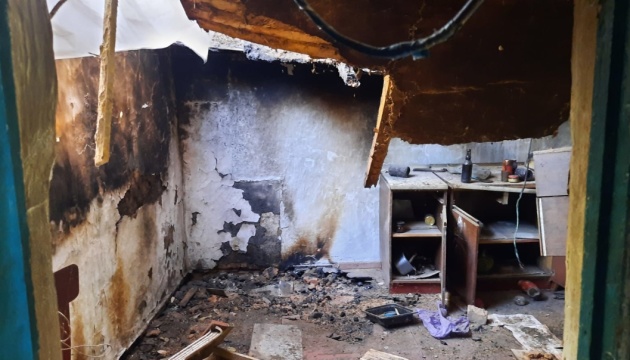 In the Kherson region, the Russian military shelled six settlements – Myrolyubivka, Visokopillya, Ivanivka, Arkhangelske, Osokorivka and Pervomaiske, among the wounded was a man who was on his way to seek humanitarian aid.

“During the past 24 hours, the troops of the Russian army shelled Myrolyubivka, Vysokopilya, Ivanivka, Arkhangelske, Osokorivka and Pervomaiske in the Kherson region,” the report says.

It is noted that enemy shells hit private houses, and there are wounded. Shrapnel from exploding shells damaged commercial buildings, garages, and people’s vehicles. Where possible, police officers removed fragments of ammunition.

A 59-year-old local resident was injured in the village of Pervomaiske, Beryslav district, during enemy mortar fire. The man was on his way to receive humanitarian aid when the Russian army began shelling the village. The victim is currently in the hospital, he has a landmine-explosive injury, gunshot wounds to his leg and back, law enforcement officers report.

Over the past 24 hours, 16 criminal proceedings have been opened on the facts of war crimes committed by the Russian army in the region, the police inform.

As reported by Ukrinform, more and more settlements are on the verge of destruction in Kherson Oblast as a result of shelling. Residents of the de-occupied settlements of the Kherson region are urged to evacuate for the winter period to Zakarpattia, Khmelnytskyi and Zhytomyr regions. After reporting the intention to evacuate to the “hotline” of the Kherson OVA or to the chatbot, specialists will form an application and inform about the details of the evacuation.