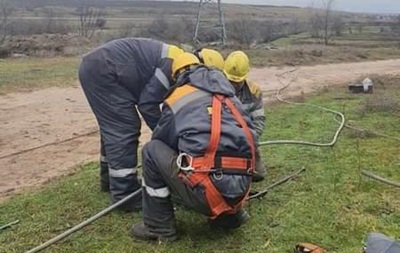 Household consumers are being gradually connected

Electricity supply to all critical infrastructure facilities – hospitals, water supply – in all regions where the company’s specialists work has been restored. Connection of household consumers is in progress.

The DTEK company has restored the operation of its power plants and power transmission lines in all regions where its specialists work, the power supply of critical infrastructure facilities – hospitals, water canals, etc. – has been fully restored. This was reported by the press service of DTEK on Thursday, January 24.

Currently, household consumers are being gradually connected, the company clarified, adding that the situation in the energy system will be stabilized in the near future.

“Having no chance against the Ukrainian army at the front, the barbarians decided to terrorize the civilian population. The Ukrainian energy system stood firm. The Russian terrorists who dreamed of taking away our electricity did not achieve anything. And they will never achieve it,” Akhmetov’s company said.

In turn, the head of DTEK Maksym Timchenko, commenting on the situation, noted that “Russian terrorists will never achieve their goals.”

“Russian terrorists will never achieve their goals by attacking civilian energy infrastructure, they will not intimidate Ukrainians and force them to abandon our principles. Attacks on energy infrastructure are a war crime for which all those responsible will be held accountable. Everyone, including the so-called Russian “power engineers” who help barbarians determine the targets of attacks. Ukraine has resisted, will resist and will win. And no terrorist attacks on civilian infrastructure will change that. We will be with the light, and you will forever remain in the dark,” he said.

We will remind, the day before The Russian Federation launched 70 missiles in Ukraine, of which 51 were shot down. As a result of the attack, energy infrastructure facilities were damaged. A number of cities and regions were left without electricity, water and heating.