Activists in Vienna placed a tombstone cross of Volodymyr Putin near the Russian embassy, ​​thus “congratulating” the Kremlin Fuhrer on his birthday and wishing him a speedy death.

This is evidenced by the video available at Ukrinform.

The tombstone cross, which contained the inscription “PUTIN” and a photo of the president of the aggressor state, was placed opposite the entrance to the Russian Embassy building, next to the wall previously painted in Ukrainian colors. 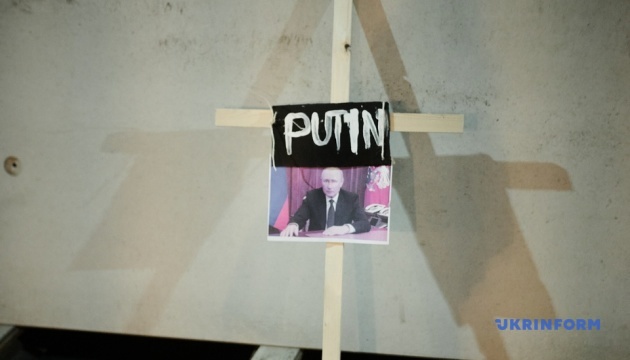 In Vienna, a tombstone cross was placed near the Russian embassy for Putin’s birthday/Photo: Ukrinform


It is known that at this time cars arrived at the Russian embassy, ​​apparently for the birthday party of the Russian dictator.

As reported by Ukrinform, to the President of the Russian Federation Volodymyr Putinwhich unleashed the largest post-World War II conflict in Europe and now threatens the entire world with nuclear weapons, on Friday, October 7, turned 70 years old.

Read also: Putin in his 70s, he no longer has options, but in Russia they still exist – Linkevičius

Activists in Prague set up a coffin with a doll of Russian dictator Vladimir Putin near the Russian Embassyalso “congratulating” him on his birthday in this way.

Ukrainians in social networks sent Putin the most sincere “congratulations” and prepared the best gift — “a ticket to the Kobzon concert”.