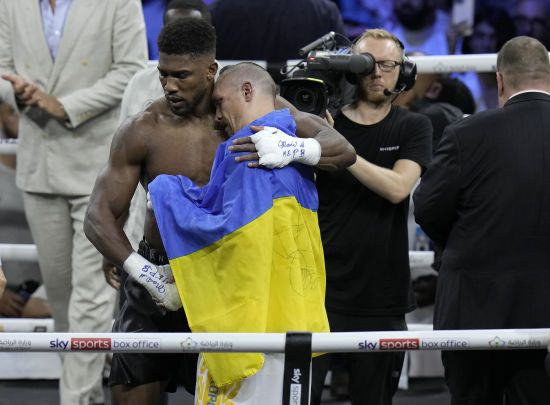 Hearing from the judges that the verdict was not in his favor, AJ was extremely disappointed and threw Usyk’s championship belts outside the ring. According to the Ukrainian, the British boxer should not be condemned for this emotional act.

“The guy broke down. I don’t think you can judge him for that. He trained, he believed in something, and then he lost for the second time. Joshua was in very good shape. But we were a little bit better. He got a little carried away. He said a lot of incomprehensible words, but i think he is a good person.

You know what I thought when he threw two belts out of the ring? “Hmm, fool.” I thought: “Sick or what? Why are you babbling them?”. It’s like when you weren’t given a ball to play with, but you took it and kicked it over the neighbor’s fence, where the angry dog ​​is.” – Usyk said in an interview with the USYK17 YouTube channel.

On the night of August 21, 2022, Usyk by split decision of the judges won Joshua in the rematch, which took place in the city of Jeddah (Saudi Arabia). Thus, the Ukrainian defended all the titles that selected at AJ’s last fall, and also won the vacant belt of The Ring magazine.

Earlier, Usyk said that he is only interested in a fight with Fury for the title of absolute world champion. At the same time, the Ukrainian said that already this year does not plan to enter the ring. The Crimean intends to heal old injuries and fully recover after the rematch with Joshua, as well as spend time with his family. Fury replied Joshua offered to fight in December this year.

“At the end of the 9th round, I missed and swam”: Usyk talked about the most difficult moment in the rematch with Joshua