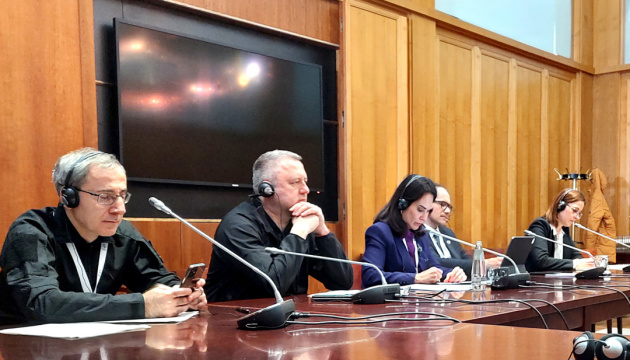 Prosecutor General of Ukraine Andriy Kostin discussed with the ministers of justice of the G7 countries the creation of a special tribunal on the crime of Russian aggression.

The parties discussed the creation of a special tribunal for the crime of aggression, the development of the system of protection of victims and witnesses, considered the ways of creating an international compensation mechanism for those who suffered from aggression.

“For the first time, the justice ministers of the G7 countries met to discuss the investigation war crimescommitted by the Russian Federation in Ukraine. We are together on the front of justice to ensure the full responsibility of the aggressor,” Kostin said.

He noted that the number of war crimes in the Russian Federation is increasing every day. According to him, prosecutors are documenting them even in the face of regular enemy attacks on critical civilian infrastructure.

Read also: Ukraine called on France to punish Russia for the crime of aggression

“We are grateful to everyone for their support in ensuring the safety of investigators and prosecutors working in the recently liberated territories to uncover evidence of war crimes committed during the occupation of these regions,” the Prosecutor General noted.

According to him, the challenges faced by law enforcement officers are not limited to mass war crimes. Among them is also the reluctance of survivors of these crimes and witnesses to testify.

Kostin discussed overcoming the challenges with the Italian Minister of Justice. “We are working on the development of a comprehensive system of protection of victims and witnesses. I hope to expand cooperation with Italian colleagues in this regard. We cannot afford to lose any evidence,” he said.

The Prosecutor General also informed the Minister of Justice of France that representatives of Ukraine are working around the world to advocate for the creation of a special tribunal for the crime of aggression.

“We deeply appreciate the expert help and advice of our French colleagues on this issue. But I must emphasize that the tribunal and the work of the ICC are two parallel ways to bring the guilty to justice. There is no contradiction between them, these mechanisms are complementary. Both of them are necessary to ensure full and comprehensive responsibility of the aggressor,” Kostin noted.

Read also: The EU proposes to create a special court to investigate the crime of Russian aggression against Ukraine – von der Leyen

Freezing and confiscating the assets of all those involved in Russian war crimes is one of the central issues of the meetings with the justice ministers of the G7 countries.

Kostin discussed the legal instruments for this process with Japan’s Minister of State for Justice. “We must take into account all the limitations of international law, but I am convinced that together we will be able to find means not only for freezing, but also for confiscation of assets that were used to finance the war in Ukraine. The funds of the guilty should be used to compensate the victims,” ​​said the Prosecutor General.

As reported, Ukraine took the initiative to create a special tribunal that will prosecute members of the Russian Security Council for committing the crime of aggression.

President Volodymyr Zelenskyy has formed a working group headed by the head of his Office, Andriy Yermak, which will deal with the issue of creating a tribunal.

Photo: Office of the Prosecutor General