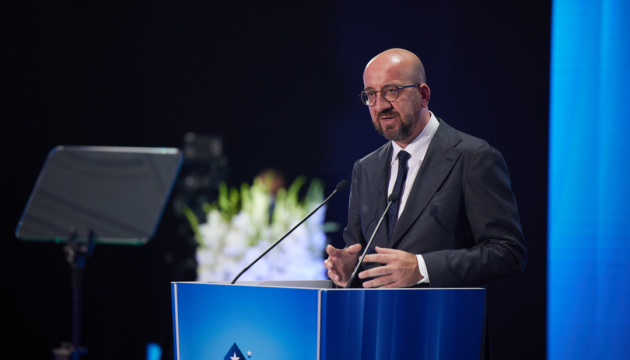 By launching a cruel and unjustified war against Ukraine, the Russian Federation deliberately put hundreds of millions of people around the world at risk of starvation and poverty. But in order to stop this food crisis and the rise in energy prices, it is enough for Russia to withdraw from the territory of Ukraine and stop the blockade of Ukrainian ports.

The President of the European Council, Charles Michel, said this today in New York from the rostrum of the UN General Assembly, the correspondent of Ukrinform reports.

“The Kremlin is lying when it claims that EU sanctions have allegedly led to food and fertilizer shortages. It is not true. Even before the start of the war (against Ukraine – ed.), Russia single-handedly decided to sharply reduce the level of its own grain and fertilizer exports, which led to instability in the world market. And it was Russia that started the military blockade of the Black Sea ports, which made it impossible to use sea trade routes (for the transportation of Ukrainian grain – ed.), – said the President of the European Council.

Read also: The President of the European Council exposed Russian lies from the UN podium

He reminded that in response the European Union opened the so-called “corridors of solidarity” for the transportation of Ukrainian food products. This, together with the grain initiative of the United Nations to open transport corridors in the Black Sea, made it possible to export tens of millions of tons of Ukrainian grain from Ukraine. The result was a decrease in food prices on the world market, transport routes were opened for food supply to the countries of Africa, the Middle East and Asia.

“The height of cynicism is that the Kremlin is again threatening not to extend this agreement with UN (regarding maritime transport corridors – ed.). Again, this will concern the most vulnerable countries, which will be the first victims of such actions. In fact, there is a very simple solution to end this food crisis that threatens us all. Russia must stop the war, withdraw from the territory of Ukraine and lift its blockade of Ukrainian ports,” the President of the European Council emphasized.

As reported, as a result of the naval blockade of Ukrainian ports in the Black Sea after the beginning of Russian aggression, tens of millions of tons of grain intended for delivery to foreign markets, including within the framework of the UN Food Program, were blocked in Ukraine. This led to a sharp spike in global food prices and put tens of millions of people in Africa, the Middle East and Asia at risk of starvation.

Read also: Shmyhal: At all meetings, we talk about the restoration of Ukraine

To solve the problem, the EU organized “corridors of solidarity” on the borders with Ukraine for the export of food by land and inland waterways. At the same time, on the initiative of the UN and Turkey, it was possible to reach an agreement on the export of Ukrainian grain by sea through the ports of the Black Sea.

These topics, among others, are being discussed this week in New York on the sidelines of the 77th session of the UN General Assembly.