In occupied Sevastopol, a 59-year-old lieutenant colonel of the SBU (and since 2014 the FSB) was mobilized as a reserve. In the past, he served in Afghanistan. He was diagnosed with arthritis, deafness and spinal hernia.

As informs Censor.NO, informs about it Telegram channel Baza.

The message states: “On the morning of September 22, retired lieutenant colonel of the SBU/FSB Ihor Lobzov received a summons for mobilization, appeared at the Military Commissariat and learned that he was obliged to appear with his belongings at the specified address that same evening. As a result, the man along with others the conscripts were taken to the military unit in Kozach Bay without any medical examination.

Also see: A 63-year-old pensioner with diabetes and brain ischemia was mobilized in the Volgograd region. VIDEO+PHOTOS

In the past, Ihor was a private in the war in Afghanistan, where, according to his relatives, he received a contusion and shrapnel puncture in the skull. Now the man has many other health problems: arthritis of the knee joint of the second degree, intervertebral hernia, deafness and pancreatitis. In addition, he is not suitable for the call because of his age. According to the official explanations of the Ministry of Defense of the Russian Federation, lieutenant colonels under the age of 55 are called up during partial mobilization. And Lobzov is already 59.

The lieutenant colonel was drafted into the army as an artilleryman – this was his first military specialty (during the mobilization, Lobzov was issued a new military card). However, in fact, Ihor served in the SBU when Crimea was still Ukrainian, and then retired in 2007 and later became a military pensioner of the FSB.

Read also: Patriarch Kirill of the Russian Orthodox Church called on the mobilized Russians not to be afraid to die: “Christ is risen and you will rise again.” VIDEO 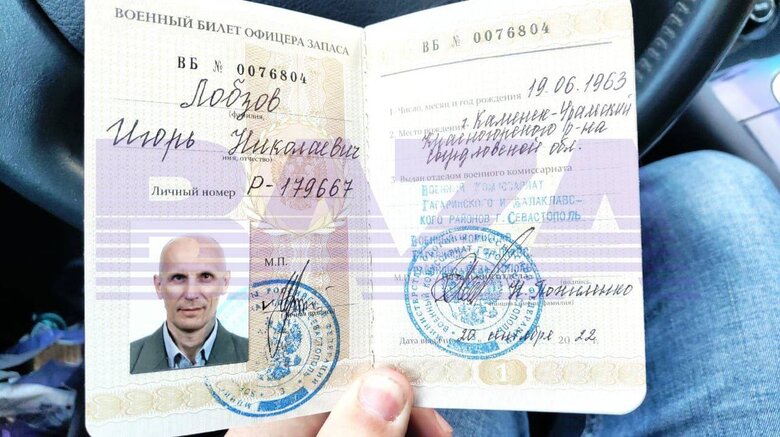