The Venice Commission came out with a tough position regarding the reform of the Constitutional Court of Ukraine: the adopted law does not meet their two key recommendations.

About this reported Vitaly Shabunin, chairman of the board of the public organization “Anti-Corruption Center”, informs Censor. NO.

“What key changes are we talking about:

1. The advisory group of experts, which will select candidates for the KSU, should include the 7th member nominated by international partners.

2. Decisions of the Advisory Group regarding the integrity and professionalism of the candidates must be binding for the subjects of appointment of judges of the KSU.

The Venetian voiced these recommendations back on December 19. However, the OP persistently pretended that they are insignificant, the law can be implemented without them, and the EU and other international partners will swallow it,” Shabunin wrote on Facebook.

In his opinion, this means that neither the Venetian nor the internationals will delegate their experts to the commission for the selection of judges of the KSU without changes to the law. Also, the European Union will not include the reform of the KSU, without which negotiations on membership are impossible.

Read also: The European Commission insists on the implementation of the recommendations of “Venetsiaka” to the law on KSU

Shabunin believes that the Office of the President wants to take control of the KSU.

“It is the KSU that will help or stand in the way of holding parliamentary and presidential elections at the same time after the war, which is what the Office wants most. In order to preserve its power, part of Bankova put not just the reform of the KSU under attack, but our European integration,” the activist wrote. 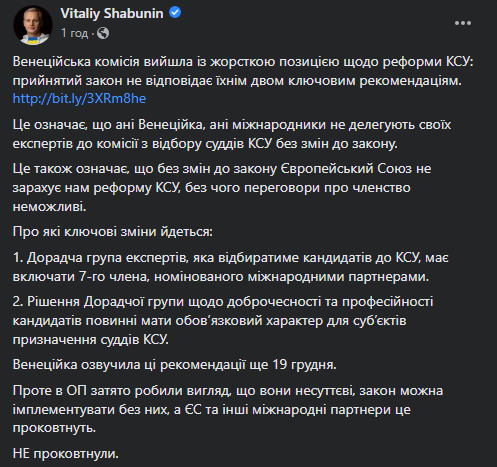 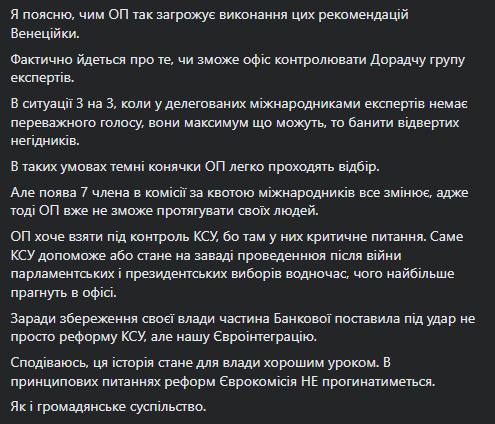 Also read: Zelensky signed the law on the CSU, which contradicts the conclusion of the Venice Commission