The deputy head of the Office of the President, Oleg Tatarov, has influence on absolutely all criminal justice bodies, except NABU and SAP.

This was reported by facebook Chairman of the board of the public organization StateWatch, Oleksandr Lemyenov, reports Censor. NO.

“Just the other day, I sat down and thought about which bodies the deputy head of the President’s Office Oleg Tatarov has influence on. It turns out that these are absolutely all criminal justice bodies, except NABU and SAP. But such an approach is not enough, so I will next, as my colleagues did, indicate the names of the bodies – BEB, SBU, SBU, NPU. That is why I decided to recall the names of those on whom Tatarov has influence. The largest law enforcement agency in terms of state is the National Police. Tatarov’s godfather, namely Maksym Tsutskiridze, is the deputy head there. The recently appointed head of the NPU – Vyhivskyi – also in the circle of “interests”. The former deputy of Vyhivskyi, Dmytro Shumeiko, is also under the influence,” he notes.

According to Lemenov, the body launched in 2018 – the State Bureau of Investigation – is not distinguished by anything else. The director of the DBR, Oleksiy Sukhachev, was appointed to the position of the head of this body after a completely planned competitive selection, where as many as 7 people applied for the position, of which 4 were “DBR employees”. The competition commission included persons related to Tatarov and even to Suhachev. The latter was elected due to a real conflict of interest. In addition to Sukhachev, Dmytro Mirkovets, deputy chief of the Bureau’s main investigative department, is said to be close to Tatarov.

It is also noted that in the Security Service of Ukraine, the head of our key special service “is definitely close to Oleg Yuriyovych. The same can be said about the young head of the poorly created unit in the “headquarters” of the SBU, Artem Shil.”

“Economic Security Bureau: the newly appointed deputy head of the department, ex-prosecutor Vitaly Gagach (direction – detectives), “key” analyst of the BEB central apparatus Mykola Chinchyn, acting detective unit Oleksandr Tkachuk. And finally, the Prosecutor General’s Office. You don’t have to look long , fired yesterday for traveling to Spain in the car of tobacco magnate Kozlovsky with his driver, Deputy Prosecutor General Oleksiy Symonenko, who “supervised” the SBU and BEB so that “economic crimes were investigated more successfully”. Also close to Tatarov is Maksym Kuterga, who works as the head of the department from the procedural management of the investigations carried out by the BEB,” Lemyenov assures.

Also read: The US insists on the release of Tatarov and Energy Minister Galushchenko

“I don’t want to open a debate about whether it is good or bad that law enforcement officers and prosecutors are “friendly” to each other. If they were honest, the criminal justice system would work much better. And how does it work, including whether the above-mentioned persons really fulfill their duties is a task, each of us will decide for himself. Actually, I have my opinion, but I don’t see the point in voicing it again,” he summarizes. 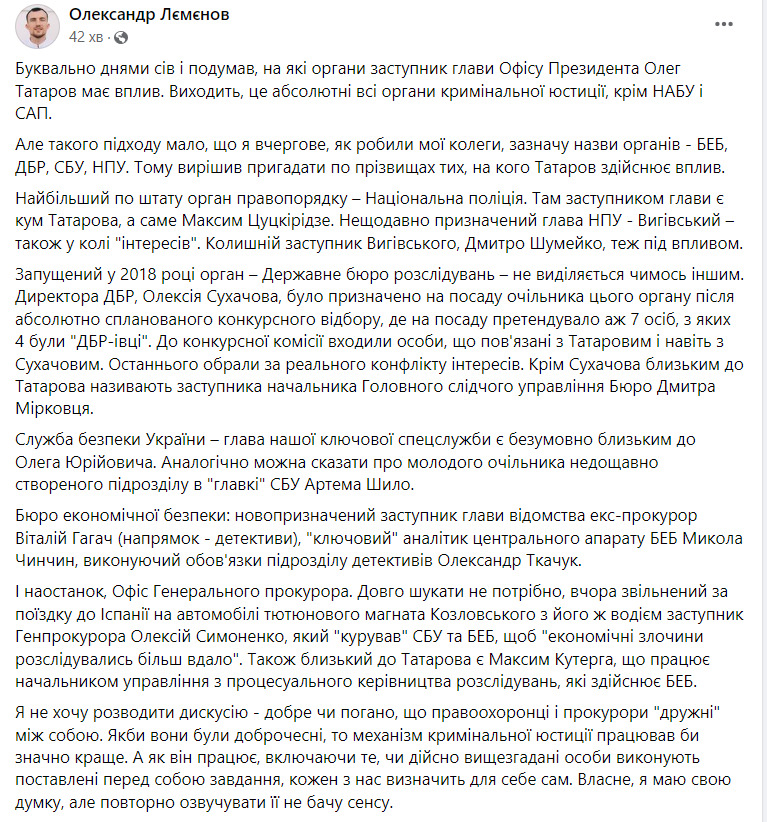