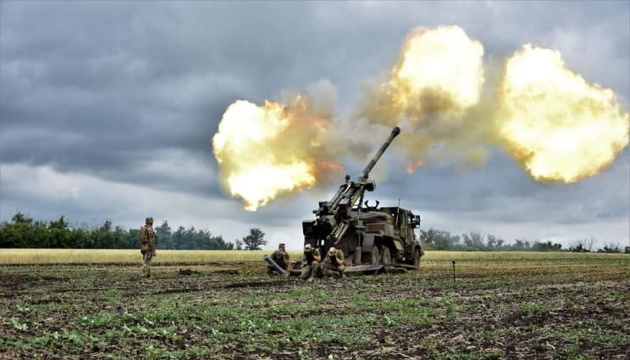 The Ukrainian military repelled enemy assaults in the Slavyansk, Kramatorsk, Avdiivsk directions and neutralized the enemy reconnaissance group in the direction of Soledar.

About this in Facebook reports the General Staff of the Armed Forces of Ukraine, Ukrinform reports.

The Ukrainian military repulsed the assault in the direction of Dolyna.

On the Kramatorsk direction the enemy used tanks and anti-aircraft guns to shell Verkhnokamyanskyi, Serebryanka, Spirny, Ivano-Daryivka, Rozdolivka, and Pereizny districts. The invaders made an attempt to conduct reconnaissance of the positions of Ukrainian troops in the Serebryanka area, but were hit by fire and retreated. The General Staff stated that the attempt to conduct reconnaissance by combat in the direction of Vesely ended with the same result.

“The enemy risked an assault near Spirny and Ivano-Daryivka. It all ended for the occupiers with losses and retreat,” the evening report says.

It is noted that in the direction of Bakhmut shelling was recorded near Kostyantynivka, Bakhmut, Soledar, Shuma, Yakovlivka, Kodem, and Vershyn. The enemy also carried out airstrikes near Soledar, Yakovlivka and Kodem.

Read also: After the attacks on the bridges, the invaders from the Kherson region flee to Melitopol

Ukrainian soldiers inflicted fire damage and neutralized an enemy reconnaissance group in the direction of Soledar.

The invaders waged offensive battles in the directions of Yakovlivka, Soledar, Vershina, Kodema, and Zaitsevo, but suffered losses and retreated. In the direction of Bakhmut, enemy units had partial success, noted the General Staff.

In the Avdiiv direction the enemy shelled the regions of Avdiivka, Nevelskyi, Pisky, Vodyanyi, Karlivka and New York with various caliber artillery, and also carried out an airstrike near Krasnohorivka.

It is reported that the enemy carried out assaults in the direction of Krasnohorivka and Pisky, was unsuccessful and retreated.

On the Novopavlovsk and Zaporizhzhia directions the invaders fired from tanks and artillery near Kostyantynivka, Orikhov, Pavlivka and ten more settlements, carried out airstrikes near Novosilka, Novoandriivka and Shcherbaki. The enemy continues conducting aerial reconnaissance by UAVs of the operational-tactical level.

According to the information of the General Staff, Russian troops conducted unsuccessful offensive battles in the direction of Pavlivka and Vremivka.

Read also: Thanks to the withdrawal from Zoloty, it was possible to avoid one more Ilovaisk and Debaltseve – Gaidai

It is reported that on the Volyn and Polissky directions the situation has not undergone significant changes.

According to the General Staff, in the Seversky direction is up to four battalion tactical groups of the enemy, the rotation of these units continues.

The enemy shelled the areas of Senkivka in the Chernihiv region and Starykovo, Atynskyi and Zhuravka in the Sumy region with barrel artillery.

Read also: Armed Forces destroyed the bridges across the Dnipro and cut off Russian supplies to the Kherson region – ISW

The General Staff emphasized that two enemy Kalibr sea-based cruise missile carriers are ready for use.

As reported, the Armed Forces of Ukraine eliminated about 43,550 Russian invaders from February 24 to August 14.

Photo: General Staff of the Armed Forces of Ukraine