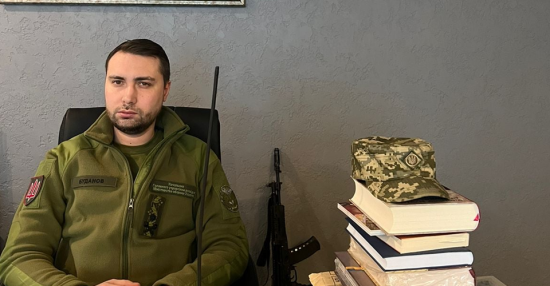 The head of the Main Directorate of Intelligence of the Ministry of Defense of Ukraine, Major General Kyrylo Budanov, in a telethon broadcast on the “1+1” channel, told whether Russia could launch a nuclear attack, about Medvedchuk’s involvement in war and when the Armed Forces of Ukraine will return to Crimea.

TSN.ua collected the main theses from the interview of Kyryll Budanov.

What was the intelligence of Ukraine doing on February 23

On the eve of the full-scale invasion of Russia, the strike unit of the special purpose unit went to the Gostomel airfield, because Ukrainian intelligence knew the plans of the occupying army to start the operation.

“We had clear plans for how this operation should begin. The main element of this operation is Gostomel, in order to make a quick approach to Kyiv. In principle, the entire plan of the Russian Federation was based on raising the Russian flag over the Presidential Administration no later than on the third day. We understood that if this landing was delayed and the Armed Forces were allowed to deploy, the whole plan would collapse from the very beginning. That’s what happened,” he said.

“Partial” mobilization: why Russia has driven itself into a dead end

Kyrylo Budanov said that Putin made a “gift to Ukraine” by announcing the mobilization, because it “will speed up the process that cannot be stopped.”

“This will only speed up the process, which is already impossible to stop. It’s agony. They will now face a problem that we have already experienced. By the way, this is the third episode in the history of the Russian Federation, when mobilization takes place: in 1914, 1941, and the third time – in 2022. Russia has found itself in a dead end. In principle, it is still possible to get out of it. It is an admission that a mistake has been made. They know how to show it. The mechanisms and the model have been worked out. We know very clearly – to enter the administrative borders in 1991 and start trying to build some kind of dialogue with our neighbors and the world. But this automatically means the transfer of power,” he said.

According to forecasts of military intelligence, active hostilities in Ukraine will soon end.

“…we are constantly rearming. Unfortunately, this is a long process. I have to say this frankly, but it will not last long (combat operations – ed.). In general, this war will not continue for long. It will end soon,” Budanov believes .

Will Russia use nuclear weapons against Ukraine?

The President of the Russian Federation, Vladimir Putin, on September 30, during the attempted annexation of part of Ukraine, once again spoke about the use of nuclear weapons.

Budanov emphasized that in in the near future, there is no reason to believe that the Russian Federation is shelling Ukraine with nuclear weapons.

“I can say only one thing: as of now, there is no reason to believe that a nuclear strike could be launched on the territory of Ukraine in the near future,” he explained.

According to intelligence, Putin’s godfather Viktor Medvedchuk, who is suspected of treason, was involved in financing potential Gauleiter and traitors, but these funds were embezzled.

“As the head of the special service, I have certain information (regarding where Viktor Medvedchuk is and what he does – ed.), but it is intelligence information and it is currently quite difficult to verify, because a short period of time has passed. Medvedchuk had a certain influence during the preparation for the active phase , which began on February 24. He certainly had to prepare. Including through him the funds that were supposed to pay people who would be Gauleiter. Through him there were attempts to finance a certain, as Russia believed, resistance movement inside Ukraine. As practice has shown, these the funds were simply embezzled,” Budanov said.

Russia also considered former People’s Deputy Viktor Medvedchuk to the post of chairman of the Verkhovna Rada after the occupation of Ukraine.

“A person from the SBU should have been appointed to the position of the head of the SBU from Russia (in the event of the seizure of Ukraine – ed.). The Russians did not have a candidate for the position of speaker of the Verkhovna Rada. They did not have one. Maybe they considered Medvedchuk. It is impossible, but one of them considered Medvedchuk, as at that time still a valid people’s deputy. Their problem (Russians – ed.) is that they wanted to combine incompatible things: formal legitimacy and their desires. The circle of people who would combine these two concepts is quite limited.” – he remarked.

Candidates for the presidential seat after the occupation of Ukraine

One of the candidates for the post of president of Ukraine was Viktor Yanukovych. The Russians ordered him to prepare to return to Kyiv, however the fugitive ex-president himself did not really want it.

“They had several options for who should become (president – ed.), but they did not have a final one. One of the most ridiculous, in my opinion, was the option of Yanukovych’s return. He was actually prepared for this. We had intelligence information from his environment, how he prepared. By the way, he himself was not very happy about it. But there was such an option,” said Budanov.

Variants of Ukraine’s policy towards Russia after the war

Russia may fall apart after the war against Ukraine, and then it will be necessary to build relations with several state entities.

Kyrylo Budanov believes that Ukraine should consider two options for its policy towards Russia after the end of the war. One of them concerns the Russian Federation after the change of power, and the other – a number of state entities after the possible collapse of the country.

“We need to seriously consider two options. First, it is the building of relations with a changed Russia formally, if the condition of transfer of power and recognition of mistakes takes place. Then Russia will formally lose some of its territories, which it annexed many years ago, but in principle, Russia will look like today’s Russia,” he said.

The second option, according to him, is this is the division of Russia and the creation of at least three, and actually five or more new state entities on the territory it currently occupies.

Ukrainian military intelligence operates in the Caucasus region. However, Ukrainian intelligence has nothing to do with the protests in Dagestan. People there revolted because of the Kremlin’s ridiculous policy.

“Many certain events in the world are attributed to me. I have a normal attitude to this. We worked and are working in the Caucasus region. This is true. But, unfortunately, for me, I cannot say that this is a personal achievement. This is, in many cases, a senseless policy of the Russian Federation Everything that is happening now is absolutely consistent,” Budanov explained.

About the exchange of Ukrainian pilots and defenders of “Azovstal”

Kyrylo Budanov said that the Russian pilot Krasnoyartsev, who bombed Chernihiv, in the spring exchanged for Ukrainian pilots.

“We exchanged pilot Krasnoyartsev four or five months ago. We exchanged him for our pilots, if I’m not mistaken, for five,” Budanov said.

Also, according to the head of intelligence, negotiations on the release of the defenders of “Azovstal” lasted more than three months. During this entire period, the exchange date was constantly changing.

“This process lasted a little more than three months. The exchange date was constantly in the process, it was “floating”. We agreed on this date around September 18. And the events that happened in the aggressor country happened simply in parallel (the announcement of mobilization in the Russian Federation – ed. .). They could no longer stop this process, which happened on September 21,” Budanov said.

Ukraine will soon return to Crimea

Kyrylo Budanov expressed confidence that Ukraine will be able to de-occupy Crimea at the end of spring 2023.

“The American general said that the Armed Forces will enter Crimea in the summer of 2023. This is his personal opinion. He relies on the facts known to him. I rely on the facts that are known to me. I believe that all this will not happen in the summer, but until the end spring. Maybe a little earlier. You can make mistakes these days. The main thing is the algorithm,” Budanov believes.

At the beginning of 2023, the war with Russia will subside, and after winter, the end of the conflict will begin with access to the administrative borders of Ukraine in the first stage in 1991.

“If you remember my statements somewhere at the end of May. I talked about the algorithm of actions. I then directly said that June will, unfortunately, not be good for us. We will lose a little. In July there will be a conditional stagnation. In August, we will start recovery movements of its territory, which will be clear to everyone. In the winter, the war will subside to a large extent. After the winter, the end of the conflict will begin with the first stage of entering the administrative borders of 1991. I am not afraid to make predictions,” said Budanov.

We will remind During more than seven months of the large-scale invasion of the Russian Federation, the Armed Forces eliminated almost 60,000 occupiers.