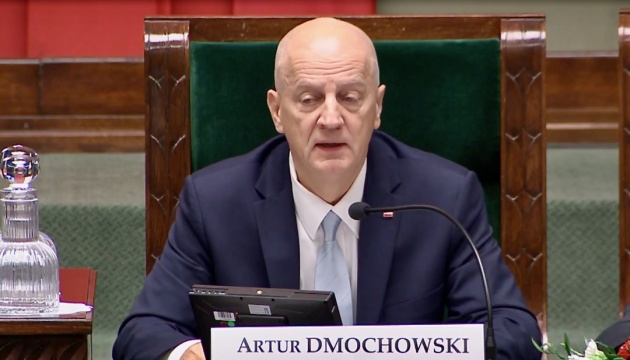 The aggressive war waged by Russia threatens the existence of the Organization for Security and Cooperation in Europe, so efforts must be made to preserve this structure.

This was stated by the special envoy of the current OSCE Chairman-in-Office, Artur Dmochovskyi, at the meeting of the OSCE PA in Warsaw, Ukrinform correspondent reports.

“The undeclared, unprovoked barbaric war in the OSCE region represents the greatest existential threat to the organization since its foundation,” the diplomat noted.

According to him, the recent death of two Polish citizens clearly demonstrates that the war waged by Russia poses a direct threat to the security of not only Ukraine, but other countries as well.

“By protecting the victim – Ukraine – and opposing itself to the aggressor – Russia, the OSCE also protects the rules-based international order. This is written in the fundamental principles of the organization, which are the foundations of international security and stability. Russian aggression destroyed the foundations of the modern concept of security, no mechanisms and measures could prevent this attack in the heart of the OSCE region,” Dmochovsky stated.

He pointed out that Russian aggression also increases disputes and tensions among the organization’s members.

Read also: Ukraine calls on the Parliamentary Assembly OSCE suspend Russia’s membership – otherwise it may leave on its own

At the same time, Warsaw is convinced: mechanisms OSCE, even if they proved ineffective in preventing this war, may be needed in the future. This requires an adaptation of the organization, but in this connection only the modernization of working methods can be discussed, but not the principles. The OSCE functions are now working in emergency mode, the diplomat noted, but the trend is not irreversible if the political will appears.

“There is one condition: the Russian army must leave the territory of Ukraine, and Russia must respect international law. Adaptation and modernization of the OSCE should not allow concessions and appeasement,” the Polish MFA representative emphasized.

“Against the dramatic facts of the atrocities committed by Russia, until it decides to change its behavior, it is hardly possible to imagine and accept a return to business-as-usual on the territory of the OSCE,” Dmochovsky added.

Read also: Zelensky thanked Poland for being at the PA meeting OSCE there are no Russians

He drew attention to the fact that one of the goals of Russian tactics in the OSCE was to close its structures in Ukraine. Therefore, it was important for the Polish Presidency to maintain its presence in our country.

The diplomat also expressed satisfaction over the fact that the Ukraine support program will be continued as a key element of the results of the Polish presidency.

As reported, the 20th autumn session of the OSCE Parliamentary Assembly will take place on November 24-26 in Warsaw. The President of Ukraine, Volodymyr Zelenskyy, addressed its delegates on the first day of work, who called to eliminate any opportunity for supporters of terror to participate in the activities of the OSCE PA.