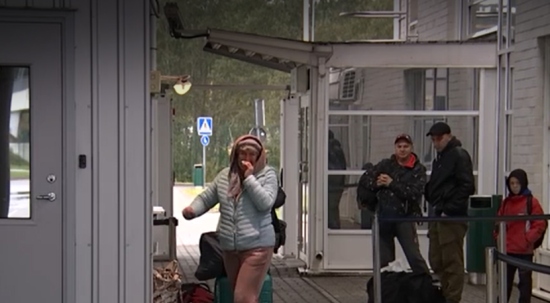 According to the Estonian minister, a little more than a thousand people were waiting at the border from the Russian side, but they were put on trucks and taken away.

Russia blocks the passage of Ukrainian citizens on the border with Estonia. In addition, Russian security forces gathered Ukrainian refugees who gathered near the Estonian border and took them somewhere in trucks.

About this stated Minister of the Interior of Estonia Lauri Laenemets, reports ERR.

“A little over a thousand people were waiting at the border, but today they are no longer there – they were put on trucks and taken away,” said Laenemets.

Over the past few days, more than a thousand people, mostly Ukrainians, have gathered on the Russian side of the southeastern border of Estonia, who were prevented from entering Estonia by the Russian authorities due to delays in border procedures.

A queue formed at the southeastern border of Estonia, where people waited for several days to cross the border. In Estonia, there are various theories as to why, but the real purpose is unknown, the interior minister admitted.

The minister noted that Estonia has also established contact with the embassy of Ukraine to check the origin of the arrived people, whether they are who they claim to be. Especially since Estonia is currently also allowing people with a copy of a Ukrainian passport to enter. But since there are opportunities for all kinds of forgeries in Russia, there are people at the border who talk to the arrivals and try to find those who are lying about their origins.

“We had only one exit (from the occupied territories. – Ed.) through Vasylivka in the Zaporizhzhia region. It was closed on the eve of September 23 and the pseudo-referendum. Men from 18 to 35 years old were stopped being released. We thought that they would then start to “scoop out” the men under themselves, decided not to wait”– the publication quotes the words of Ukrainian Andrii Medusa.

According to him, Russians and Estonians cross the border in five minutes. The man says that the Russians have set up on the border “filtering” for Ukrainians.

“Everyone went through filtering. At first we sat at the checkpoint and waited in line. We have documents were taken awaypunched them and then led them away, took them fingerprints. About six or seven people from the list were taken for filtering for four hours, but no more. In order not to be separated (by families. – Ed.), some asked to go together. The employees of the border service refused this and said to let those who stand alone at the border forward. Families had to let a person pass and wait another 4-6 hours for their turn to be filtered.

When the phone is taken away, you go to the survey. They ask: “What is happening with you? How did you live in Ukraine before what is happening? Why are you going abroad and don’t want to stay in Russia?? They ask for parents, sisters, brothers. Asked: “Here we came with the “Russian peace”, you don’t like it, right?” Provocative questions are asked. Some were asked: How do you like our president?? Well, this Putin. We were eventually let through”– said a Ukrainian from the occupied part of the Zaporizhzhia region.

Earlier it was reported that Ukrainians from infiltration camps in Russia are fleeing to Estoniabut even there they come under pressure from Putin’s supporters.