People’s deputy from the “Servant of the People” faction Andriy Kholodov missed two meetings of the Verkhovna Rada, being in Vienna, where his family lives.

It is reported Censor. NO with reference to Facebook page journalist Mykhailo Tkach.

He reports that he was confused when, when asked about the reasons for his stay in Vienna, Kholodov answered: “What are people doing in Vienna? I have some time here.”

A family of “servants of the people” lives in the capital of Austria.

The journalist transmits the continuation of the dialogue:

– I wanted to ask if you missed the parliament session last week or not?

– And for what reasons?

– And I’m not here all the time in Vienna.

– And for what reasons did you miss the session of the parliament?

– Well, I have personal reasons.

– It’s just that you are a people’s deputy, and now there is a war and, probably, some important laws were adopted, draft laws were discussed.

– And, probably, there should be some reason.

– Well, I have a relationship, I communicate with the Verkhovna Rada and I have my reasons.

– How long have you been in Vienna?

– These are my questions.

– Look, what do you want to hear from me?

– We are wondering, for what reasons and why did you miss the meeting?

Also read: The SBI will check whether the fugitives crossed the border to Vienna legally

The journalist reminds that people’s deputies are accountable not to the Verkhovna Rada, but to the people of Ukraine, who elected them. 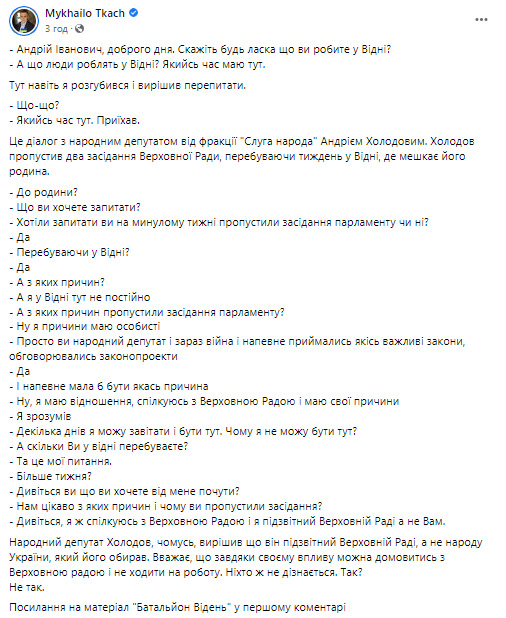 It will be recalled that the journalists found out that Ukrainian officials and businessmen calmly leave Ukraine despite the ban. In particular, are located in Monaco Kostyantyn Zhevago, brothers Ihor and Hryhoriy Surkisy, developer from Dnipro Vadym Yermolaev, his colleague and member of the Kyiv City Council Vadym Stolar, etc.

In Vienna, they are waiting for the end of Russia’s war against Ukraine scandalous head of the Constitutional Court Oleksandr Tupytskyi, pro-Russian politician Yevgeny Muraev, criminal authority Oleksandr Petrovskyi and his entourage and others.

See also “Censor.NET”: The SBI will study whether the persons involved in the journalistic investigation “Monaco Battalion” crossed the border legally. VIDEO