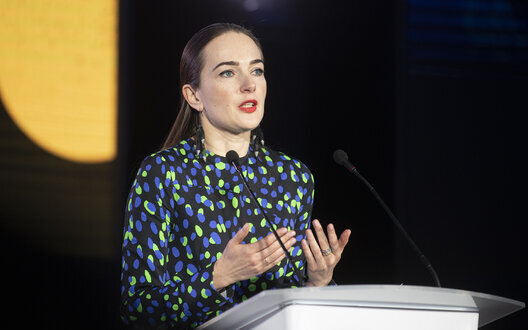 Ukraine must get all the necessary weapons to defend against Russian aggression.

About this stated Head of the Center for Civil Liberties, 2022 Nobel Peace Laureate Oleksandra Matviychuk during the honorary lecture of the Kyiv Security Forum, organized by the Arseniy Yatsenyuk Foundation “Open Ukraine”, reports Censor. NO.

“I can understand people who read newspaper headlines that the Nobel Peace Prize laureate is calling for Ukraine to receive battle tanks, but the values ​​of modern civilization must be protected,” she emphasized.

Matviychuk said that after the beginning of the Russian aggression, Ukraine faced an unprecedented number of war crimes.

“These are the shootings of evacuation corridors, Russia’s creation of a system of filtration camps, targeted destruction of residential buildings, churches, schools, hospitals, murder, rape, torture, kidnapping of civilians in the occupied territories,” she said.

“We are documenting this suffering so that sooner or later Putin and the top political leadership of Russia, the top military command, as well as all Russians who committed these crimes with their own hands, will be punished,” the human rights activist emphasized.

Matviychuk noted that Putin started the war against Ukraine not because of a mythical military threat, but because democracy had moved closer to Russia’s borders.

“Putin is not afraid of NATO – Putin is afraid of the idea of ​​freedom,” she said.

See also “Censor.NET”: “Conversation about war, victory and the future”: the Kyiv Security Forum holds an honorary lecture by the head of the Center for Civil Liberties, Matviychuk. LIVE BROADCAST

Matviychuk also emphasized that the victory of Ukraine should be not only the liberation of the occupied territories, but also the democratic transformation of the country.

“It makes no sense to win this war and turn into Russia,” she emphasized.

“We are now paying too high a price just for the chance to build a country in which the rights of every person are protected, the government is accountable and under control, the courts are fair and independent, and the police do not beat students who go out for a peaceful demonstration,” Matviychuk summarized.