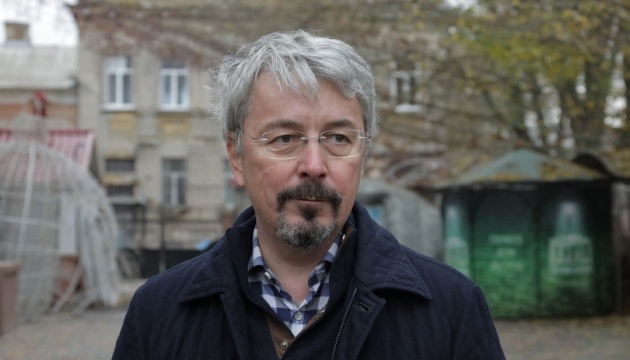 Ukraine is counting on the solidarity of the European Union countries in the protection of cultural heritage from the Russian invaders and is focusing its efforts on the urgent needs to preserve cultural objects in winter conditions.

Oleksandr Tkachenko, Minister of Culture and Information Policy of Ukraine, stated this in Brussels during a press conference on the results of participation in the work of the EU Council of Ministers on Culture.

This is how he answered Ukrinform’s questions about the measures taken by the ministry to record and restore historical and cultural treasures of Ukraine destroyed or damaged by the occupiers.

“The government has a clear register that records damage to cultural heritage. On the other hand, it should also be checked at the level of international experts. This process will begin, and each such object will require a special procedure to verify and restore it. But now it is almost impossible to start such a recovery. Therefore, we have to at least prepare these objects for winter in order to preserve them in these conditions. For this purpose, we need certain materials, including generators and other things,” the government official said.

He noted that in many cities of Ukraine, numerous objects of cultural heritage were destroyed and damaged, the restoration of which will be possible only after the war. But even now, in winter conditions, these objects need protection.

“I explained to my colleagues what the situation is now. More than 1,000 cultural objects were damaged. We are approaching winter, and more than 4,000 generators are needed just to support the museum sector of Ukraine. There are other challenges related, in particular, to the need to apply sanctions against the Russian propaganda machine, which includes some officials of the cultural sphere in Russia. There are also questions regarding the promotion of Ukrainian culture abroad,” Tkachenko said.

The minister noted that the ICIP sets itself the task of keeping Ukrainian artists and representatives of culture in Ukraine. Their influence, work in Ukraine is extremely important and of great importance to people who are now defending the freedom and will of their homeland on the battlefield.

“We offered (EU partners – ed.) specific figures. One percent of the budget for culture from the EU states can be directed to support the cultural sector of Ukraine, every year for the next four years, as part of the implementation of the EU program for 2023-2026.

Read also: Tkachenko discussed the seasons of Ukrainian culture in Belgium with the mayor of Brussels

As the European Commissioner for Innovation, Research, Culture and Youth Maria Gabriel noted during the press conference, EU government officials expressed solidarity with the people of Ukraine and their readiness to support Ukrainian culture and Ukrainian artists. They will study Ukraine’s proposals in order to form a clear attitude to the opportunities in this area.

In turn, the Minister of Culture of the Czech Republic, which presides over the EU, Martin Baksa, noted that the main topic during the discussion during today’s meeting was precisely the situation surrounding culture and cultural heritage in Ukraine.

“I would never have believed that in the 21st century we would witness the barbarism that was demonstrated by Russia during the past nine months. Putin is not only destroying the lives of innocent people, but also Ukrainian culture and cultural heritage… But I am sure that the attempt to destroy Ukraine cannot be successful, the Russians will not achieve this. We will help Ukrainian artists and preserve Ukrainian cultural heritage,” the Czech government official emphasized.

Read also: For the first time, Ukraine took part in the meeting on issues of education, youth, culture and sport of the EU – Tkachenko

As you know, from the beginning of the Russian invasion, the Russian invaders chose cultural objects as the primary target for their attacks – historical monuments, museums, libraries. In the temporarily occupied territories, they began to impose Russian programs in schools, remove Ukrainian literature in order to destroy Ukrainian history and culture, which are the basis of the self-identification of the people of Ukraine. Such actions of the invaders only increased the resistance of Ukrainians and the determination to drive the Russian invaders out of Ukraine.