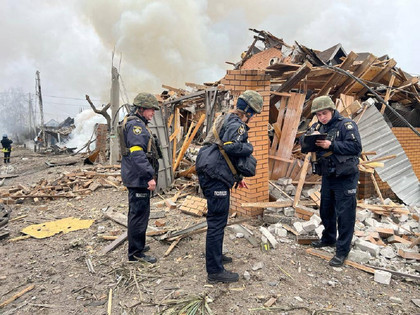 Police work at the site of a rocket attack by Russian invaders in Dnipro, November 26, 2022

On the afternoon of Saturday, November 26, Russian war criminals launched a rocket attack on the Dnipro River, as a result of which private homes caught fire.

An air alert was announced in Dnipro at 11:38 a.m., while local Telegram channels reported the first explosion at 11:37 a.m. According to eyewitnesses, smoke immediately rose over the town and houses were visible on fire. Later, a second explosion sounds.

Mayor of Dnipro Boris Filatov reportedthat the city’s communications were unaffected by the impact, but several transmission substations were automatically disconnected.

By information head of the regional military administration Valentyn Reznichenko, the impact partially destroyed seven private houses and a fire broke out. A woman was extracted from the rubble, she has already been hospitalized, she is in serious condition. In general, from the attack of war criminals suffered six persons

Police clarifiedthat the Russians hit the private homes of civilians in the Amur-Nizhnyodniprovsky district.

Let’s remember, the last time was Russia inflicted massive missile strikes on Ukraine on November 23. This led to long-term power cuts in almost all regions.

If you find an error on this page, highlight it and
hurry
Ctrl+Enter